The Beauty Of Deadlines 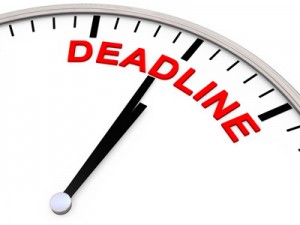 Deadlines; everybody adheres to them but nobody likes them. Most people truly dislike the pressure created by deadlines, like a looming black cloud over your head, not letting you relax, robbing you of your freedom.
This however, is largely due to the perception people have, why is a deadline a thief to your freedom? Why does it not let you relax? The opposite could be argued when approached from a different perspective. Think about it, you have a deadline, you have an exam to re use for or an assignment to hand in, the deadline tells you when so you have the freedom to start early and finish early, as a result gaining a longer period of relaxation.
In other words, let’s say you have an assignment to hand in in 2 weeks, why not do it as soon as you get it?
The reasoning behind this? Your fellow students who leave the assignment to the last minute will be living in a prison of their own creation because they’ve left it to the last minute.
You?
You’ll be experiencing a deep sense of relaxation and freedom that, for your fellow students, is unheard of.
So the next time you have a deadline, get started early, as early as possible because you know  what they say;
‘The early bird gets the worm.”
We would love to have you as our student. Learn more about UNICAF and how you can study with us
Category: About UnicafBy m.antonescuAugust 30, 2015Leave a comment
Share this post
Share on FacebookShare on Facebook TweetShare on Twitter Share on LinkedInShare on LinkedIn

TRANSFORMATION THROUGH NEW LEARNING IS THE KEY FOR SUCCESS IN THE POST-PANDEMIC WORLD
June 5, 2020

UNIVERSITY CHALLENGES CAN BE OVERCOME BY PARTNERING WITH UNICAF
March 31, 2020